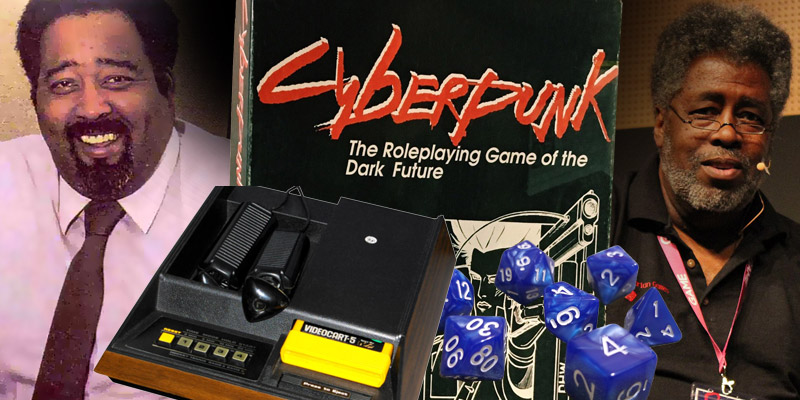 Modern gaming would not be what it is today without the contributions of Jerry Lawson and Mike Pondsmith, whose innovations revolutionized both computer and tabletop gaming.

Gerald Anderson “Jerry” Lawson was born in Brooklyn, New York, in 1940. Lawson’s father was a longshoreman, and his mother worked for the city; she also served on the PTA and made sure that he received a good education. His grandfather was educated as a physicist, but he was unable to achieve a career in physics and worked as a postmaster instead. Lawson’s hobbies included ham radio and chemistry, and he attended Queens College and the City of New York College, though he did not obtain degrees from either.

In 1970, Lawson joined Fairchild Semiconductor in San Francisco as an applications engineering consultant. In 1975, using Fairchild’s F8 microprocessors, he created the early arcade game Demolition Derby, one of the earliest microprocessor-driven games, in his garage. He was made Chief Hardware Engineer and director of engineering and marketing for the video game division, and led the development of the Fairchild Channel F console, which was released in 1976. The console was notable for being the first to feature swappable game cartridges; to this point, game ROMs were soldered onto a chip that was not removable. The innovation of the cartridge made it possible to create a base console with a virtually unlimited library of swappable game modules. The concept was so unique, every cartridge had to be approved by the FCC. Another of Lawson’s innovations was the “pause” feature for video games. Although the Channel F console was not a commercial success, its innovations were soon incorporated into other consoles, including the Atari 2600, which was released a year later in 1977.

In 1980, Lawson left Fairchild to found Videosoft, a game development company that produced software for the Atari 2600. The company folded after five years, at which point Lawson became a consultant. In 2011, Lawson was honored as an industry pioneer by the International Game Developers Association. A month later, he died of complications from diabetes.

Mike Pondsmith was born to a military family; his father was an officer in the U.S. Air Force. Pondsmith grew up playing naval wargames, and was introduced to tabletop roleplaying games while studying at the University of California, Davis. While he was not interested in the fantasy setting of Dungeons & Dragons, he was fascinated by the gameplay mechanics. His interest in tabletop roleplaying was again piqued when he discovered Traveller by Game Designers’ Workshop.

In the early 1980s, while running a typesetting house at the University of California, Santa Cruz, Pondsmith rewrote Traveller into a new game, Imperial Star, for his own amusement, as he was dissatisfied with the game’s mechanics. In 1984, the first game that he developed from the game up, Mekton, was released. Mekton was influenced by Japanese anime and manga, particularly Mobile Suit Gundam. The success of Mekton led to Pondsmith founding R. Talsorian Games in 1985. In 1987, he released Teenagers from Outer Space and Mekton II, a revised version of Mekton that featured mechanics based on the Interlock system and was later used with slight modifications as the basis for the Cyberpunk line, which was inspired by the film Blade Runner and became highly successful.

In 1994, Talsorian released Castle Falkenstein, a steampunk-themed fantasy roleplaying game that used playing cards rather than dice, and was geared toward live-action roleplaying. Falkenstein remains Talsorian’s most critically-acclaimed game to date, and was adapted to GURPS in 2000. Pondsmith also worked on games outside of Talsorian, including Buck Rogers XXVC, two Dungeons & Dragons supplements, and a supplement for Forgotten Realms. He served as president of the Game Manufacturers Association, and in 1993 arbitrated a dispute between Palladium Books and Wizards of the Coast. Beginning in the 1990s, Pondsmith also began working on video games, including MechCommander 2, Crimson Skies: High Road to Revenge, and The Matrix Online.

Without the contributions of both of these men, the worlds of video and tabletop gaming would be dramatically different.