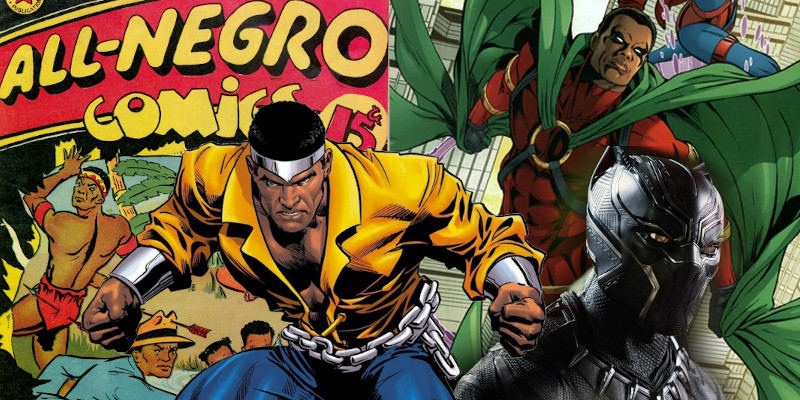 While superhero comics were born with Superman in 1938, it would be several years before black characters began to appear even in supporting roles, and more than three decades before a black superhero would headline a comic of his own. More and more black heroes would appear in the ensuing decades.

One of the first black characters in superhero comics was Whitewash Jones, who first appeared in 1941’s Young Allies, a spinoff of Captain America featuring Bucky and other young characters. Jones was an unfortunate example of offensive stereotypes, but modern comics rehabilitated the character after Bucky became the new Captain America in 2014. The older comics were said to be comic books that existed within the comics world, and were based upon the “real” events the characters experienced. This allowed for a great degree of leeway for writers to make references to the older comics without being beholden to their more problematic aspects; the characters’ “real” ages were said to be quite a bit older; while the original comics portrayed the Young Allies to be as young as twelve years old, this retcon established that they were actually no younger than eighteen. Washington “Wash” Jones was established to have gone on to become a colonel in the U.S. Air Force after the war, and was buried with honors in Arlington National Cemetery upon his death in 2014.

Another early character was first published in 1942, in the pages of America’s Greatest Comics #2 by Fawcett Publications. Captain Marvel creator C.C. Beck wanted to create a new sidekick for the Marvel Family that would appeal to African American readers; unfortunately, Steamboat Bill was such an offensive, stereotyped portrayal, it led to protests and marches on the Fawcett offices until the character was removed from the comic in 1945.

In 1947, Orrin Cromwell Evans, noted as “the first black writer to cover general assignments for a mainstream newspaper in the United States” by an article in Comics Buyers Guide, partnered with several other African American writers and artists to produce All-Negro Comics. The first and only issue “did not circulate outside of pre-civil rights segregated black communities,” according to anarticle by Stanford W. Carpenter in Africa and the African Diaspora: Cultural Adaptation and Resistance. When Evans tried to publish a second issue, however, he was unable to purchase the newsprint required to print the comic. Researcher Tom Christopher noted that, while a second issue was planned, none of the distributors Evans contacted would sell to him; this was attributed to competing, white-owned businesses putting pressure to drive Evans out of business, including Parents Magazine, which published two issues of Negro Heroes in 1947 and 1948, and Fawcett, which had begun publishing Negro Romance, as well as a series of sports hero comics.

Black characters were virtually excised from comics for nearly two decades, except as helpless, savage African tribesmen that the white heroes had to rescue. In 1965, Dell Comics produced a series called Lobo, featuring an eponymous African American western hero. Many retailers refused to sell a comic with a black hero prominently displayed on the cover, and the series was canceled after only two issues.

The first true black superhero appeared in July 1966’s Fantastic Four #52: Black Panther. Created by Stan Lee and Jack Kirby, the character would star in storylines in several Marvel comics, eventually earning a title of his own in 1977. Along the way, one of his most famous storylines was born out of an editorial demand to feature more white characters; in response, writer Don McGregor wrote a four-issue story where the Black Panther, previously established as the king of the fictional African nation Wakanda, came into conflict with the Ku Klux Klan while in America. During this time, Marvel also introduced the Falcon, a new sidekick for Captain America, in 1969’s Captain America #117. The hero would soon earn a shared title with Captain America and the Falcon from issues 134-192 and 194-222, from February 1971 through June 1978, and in January 2015, he took over as the new Captain America for several years.

In 1970, DC introduced their first black superhero, Guardian, in Teen Titans #26; the character would see new life on TV’s Supergirl, albeit with a now-African American Jimmy Olsen taking on the role, rather than Mal Duncan, as in the original comics. The next year would see the introduction of a black Green Lantern, John Stewart, in issue 87 of that title. Although early stories tended to portray Stewart as a stereotypical “angry black man,” the character received a new lease on life when he was featured as a main character on the Justice League and Justice League Unlimited animated series.

Soon, black heroes began appearing with greater frequency. Butterfly became the first black heroine, appearing in Hell-Rider #1, published in August 1971; although a third issue was advertised, the series was canceled after just two issues. In 1972, Marvel released Luke Cage, Hero for Hire, the first comic since Lobo to star an eponymous black hero. The rest of the 1970s saw the introduction of even more black heroes, mostly at Marvel; Blade in Tomb of Dracula #10, Brother  Voodoo in Strange Tales #169, and at DC, Wonder Woman met Nubia, her counterpart from the Floating Island, who had been raised by the Roman god of war, Mars. Storm joined the X-Men in 1975’s Giant-Sized X-Men #1, and DC responded to Luke Cage with the release of Black Lightning #1 in 1977.

Originally pitched to Luke Cage creator Tony Isabella as the Black Bomber, the character was envisioned as a white man who becomes a black superhero when he gets angry. Realizing that this was a terrible idea, Isabella pitched Black Lighting instead: a high school principal who gains electrical powers and becomes a reluctant hero out of necessity.

The 1980s saw many more new black heroes, including Cyborg of the New Teen Titans in 1980, Vixen in 1981’s Action Comics #152, Monica Rambeau as the new Captain Marvel (and later Pulsar, Photo, and Spectrum) in 1982’s Amazing Spider-Man Annual #16, Cloak, of the interracial couple Cloak and Dagger, in Peter Parker, the Spectacular Spider-Man #64, and James “Rhodey” Rhodes, who first took over for an alcoholic Tony Stark as Iron Man before becoming the armored hero War Machine, first appeared in Iron Man #169.

A new explosion of black heroes came in the 1990s, including the incredibly popular Spawn in 1992, as well as the creation of Milestone Media in 1993. Milestone, founded by legendary creator Dwayne McDuffie, was a realization of the dream first envisioned by All-Negro Comics in 1947, nearly fifty years earlier: a studio of African American creators, with largely African American characters, telling the stories that were unique to the experience of African Americans. Milestone created dozens of new characters, including Icon, Rocket, Static, Hardware, and more. As an imprint of DC, Milestone nevertheless retained editorial independence and creator rights. The imprint featured a line-wide crossover event with DC’s Superman family titles, introducing the characters to a wider audience in the process. The line ceased publication in 1997; low sales were attributed to a combination of retailers being hesitant to carry “black comics,” and some members of the African American community accusing McDuffie of “selling out” by allowing a white-owned publisher to distribute their titles.

By 1999, Static, the breakout star of the imprint, was featured in his own animated series, which soon crossed over with the contemporary Justice League animated series on multiple occasions. In 2014, Static was incorporated into the regular DC universe, following the “New 52” line-wide reboot. Although Icon and Rocket appeared in the Young Justice animated series, most of the Milestone characters were not incorporated into the DC shared universe. DC revived the line as Earth M, one of the Earths in its revived and expanded multiverse, in 2017, but this again proved to be short-lived.

In the past twenty years, many of the more prominent new black heroes have been new characters taking on the mantle of existing, primarily white, legacy characters, including Miles Morales as the new Spider-Man, Riri Williams joining the Iron Man legacy as Ironheart, Kaldur’ahm as the new Aqualad, and Val-Zod becoming the new Superman of Earth 2.

Despite problematic origins, black characters in superhero comics have grown and begun to find a degree of parity with their white counterparts. There is still much room for growth, and as the comics industry continues to evolve, new voices are adding to that chorus.