Aiming High in the Air Force: A Memoir 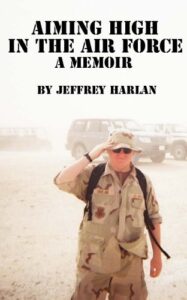 “After flying to San Antonio, Texas, a bus carried me and dozens of other recruits to nearby Lackland Air Force Base. As the late August sun set, the bus pulled through the main gate. A heavy feeling began to descend into the pit of my stomach. Was this really what I wanted? It was too late to turn back.”

Jeffrey Harlan enlisted a few months after the September 11 attacks. At 24, he was the oldest enlistee in his basic training flight. From the trials of basic training to infighting within the ranks, he looks back at the events of his six years in the military with pride, amusement and, at times, chagrin.

Buy the book on Amazon Kindle!