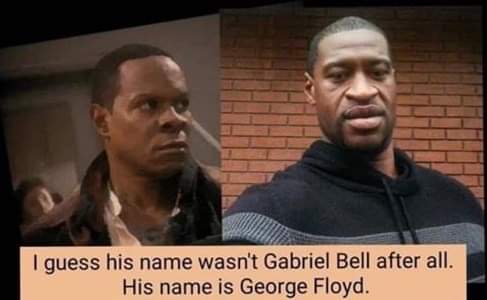 Minneapolis and the Bell Riots

In the wake of George Floyd’s death and the unrest that has followed, many have taken to the Internet to compare recent events with the Bell Riots from Star Trek, and others have questioned whether the comparison is apt, or even appropriate.

In the two-part episode “Past Tense” from Star Trek: Deep Space Nine’s third season, a transporter accident sent Commander Sisko, Lieutenant Dax, and Doctor Bashir back in time to San Francisco in the year 2024. Sisko and Bashir were immediately taken into custody and placed into a Sanctuary District, while Dax was taken in by a wealthy media executive. The fact that Sisko was a black man, and Bashir middle eastern, whereas Dax was an apparently white woman (her spots notwithstanding, which were quickly dismissed as tattoos), was not lost on most viewers when discussing their treatment.

Sanctuary Districts, the episode soon explained, were found in every major city in the early 2020s, and were used to house those without jobs or homes. Once there, the residents were quickly dismissed and forgotten. Living conditions were squalid, with no apparent electricity or even basic needs apparently provided for beyond food handouts, and violence was endemic. Sisko described the districts as a “bad” and “ugly” mistake, one of many made by humanity that would, eventually, pave the way for the more utopian future enjoyed by humanity in Star Trek’s future.

While in the past, Sisko was forced to take the place of Gabriel Bell, a black man for whom the riots were named, when Bell was killed by another Sanctuary District resident when intervening to protect Sisko and Bashir a few days before the riots were to occur. The riots were “one of the watershed events of the twenty-first century,” without which the future as they knew it would cease to exist. Bell was recorded as having given his life to save a group of hostages, becoming a national hero. Outrage over Bell’s death, as well as the deaths of hundreds of other residents, changed “the public’s opinion about the Sanctuaries. They will be torn down and the United States will finally begin correcting the social problems it had struggled with for over a hundred years.” Fully aware that Bell was fated to die, Sisko nevertheless volunteered to take Bell’s place in history in order to assure that history would unfold as recorded.

The episodes were written just over two years after the 1992 Los Angeles Riots that followed the beating of Rodney King at the hands of the police, and the fact that Bell, a black man, was at the heart of the riots was no coincidence. Over time, elements of the episodes have proven to be eerily prescient, yet depressingly logical extrapolations of American politics and society over the past century. Even then, Sisko was aware that black voices were ignored, insisting that a white man, Webb, be the group’s spokesperson, saying, “They can’t dismiss Webb as easily as you or me. He’s got the face. He’s got the family. He’s the guy next door. And that’s what they need to see.”

The specifics of the Bell Riots are not very similar to those of the current unrest in Minneapolis and other U.S. cities, but the parallel to the Rodney King incident that inspired the episodes is undeniable. While Star Trek kept the commentary on the economic status of the residents of the Sanctuary Districts, rather than their ethnicity, as the social commentary of the episodes would likely have been ignored by some had the writers been more overt, the underlying messages remained unchanged: all humans have dignity and worth, and, as President John F. Kennedy famously said in 1962, “Those who make peaceful revolution impossible will make violent revolution inevitable.”

The Bell Riots became a catalyst for change because, in the midst of the violence, while the eyes of the world were on them, the people took to the Internet to share their stories. It humanized the event, and gave faces to an otherwise faceless protest. If there is a lesson to be drawn from the episodes, that should be it. With the abundance of tools, from blogs to YouTube to TikTok, the means are there for these stories to come out. The eyes of the world are on America. These events may not be the Bell Riots… but perhaps they could have the same impact on the future. That is up to us.